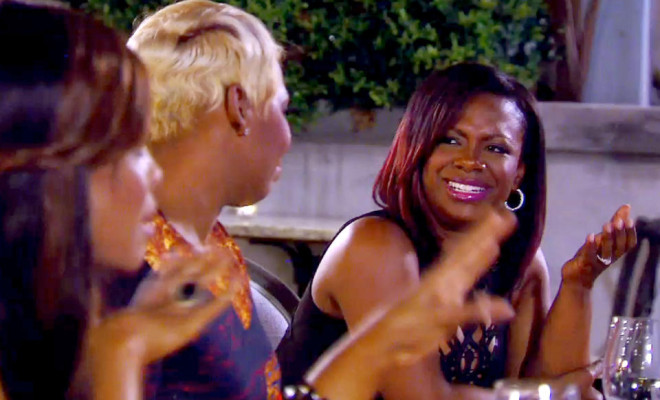 Kandi Defends Her Loyalty On RHOA: ‘I Don’t Play The Middle’

The Real Housewives of Atlanta star Kandi Burruss has an interesting intro-line this season; she isn’t about the drama, so if the ladies don’t start any with her, there won’t be any at all. Of course, Burruss is known for wanting a drama-free environment, especially with the ladies. She has had plenty to deal with, as her mother has been questioning her relationship with Todd Tucker. Burruss’ own mother appeared to be against the marriage.

Some viewers can’t seem to understand Kandi Burruss’ decision to not get involved with her friends when they are arguing. How can she just sit there and not take sides in arguments? Kandi believes that she is a loyal friend, who isn’t about to pick sides over something that has nothing to do with her. But that doesn’t mean she stays silent if she sees something that she feels is wrong.

According to new tweets, The Real Housewives of Atlanta star Kandi Burruss is now revealing why she is not the one to pick sides in an argument. She defended her viewpoint when a viewer reached out to her, saying that Kandi would have to pick sides at one point or another.

“At some point you have to pick sides tho. How can you be loyal to opposing parties? Not possible,” one fan wrote to Burruss, questioning how she was able to not pick sides when her friends were arguing.

“My friends Tan & Carmon didnt care for each other. If I chose 2 follow behind one & dis the other I would be missing a great friend,” Kandi replied, facing the following reply, “it’s not about like or dislike. If 1 is proactively hurting the other, how can YOU be a true ‘friend’ by playing the middle??”

But it sounds like Kandi Burruss doesn’t think that it is necessary to get involved in drama that isn’t about her.

“I don’t play the middle. I tell them if I think they’re wrong. If I don’t like what they’ve done or said I will let them know,” Kandi revealed, adding later to another fan, “Lol! It’s hard to be neutral. Everybody wants you to pick sides.”

But this doesn’t mean that Kandi Burruss is a horrible friend. For one, Burruss didn’t mean to embarrass Demetria McKinney at her sex party, where it was revealed that another woman may have been dating her man. In addition, Kandi has been a big support for Phaedra Parks as she has dealt with Apollo Nida going back to jail. According to the Inquisitr, Kandi has revealed that it has been a tough situation, but she has never picked sides.

What do you think of Kandi Burruss’ loyalty?