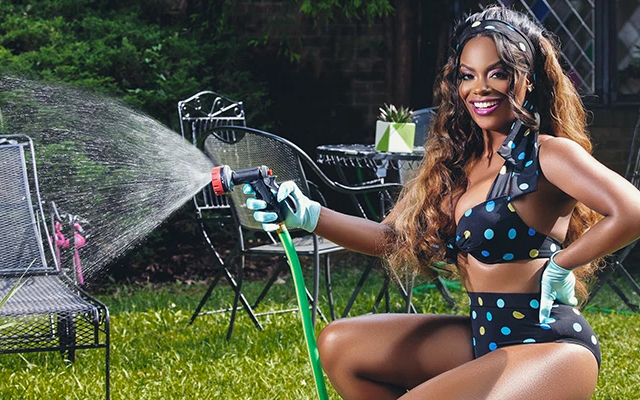 For our “Fall Preview” issue, Kandi Burruss opens up about becoming a producer on the Broadway play “Thoughts Of A Colored Man,” her acting debut on “The Chi,” how ‘Real Housewives Of Atlanta’ changed her life, and her marriage to Todd Tucker.

You couldn’t stop Kandi Burruss’ grind if you tried. The spirit of a hustler flows through her stacked 5-foot-3 frame like her songs do in your head after one listen. Innately strong-minded and divinely skilled with the pen, Kandi Burruss is a force on many fronts and now she’s making the foray onto Broadway as a producer on the upcoming stage play, Thoughts Of A Colored Man. 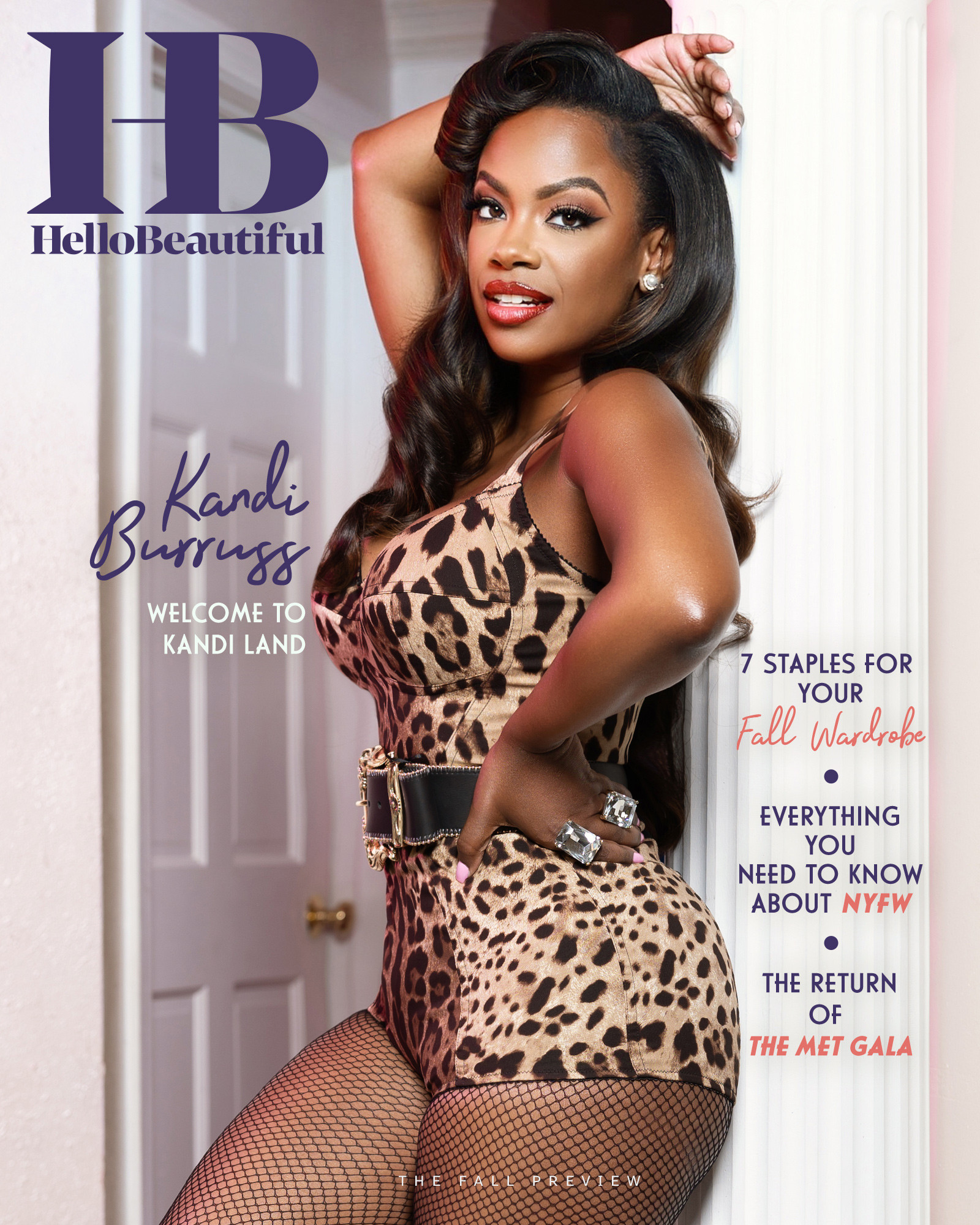 If “anything is possible” was a person, it would be Burruss. During our mid-Monday chat, the Real Housewives Of Atlanta personality recalls journaling and praying every day, in high school, for her group Xscape to get its first recording deal and hit record before graduating, which they did with their debut single Just Kickin’ It in 1993. As a founding member of the beloved girl group, Kandi’s belief in the power of manifestation was affirmed.

One of the worst days of her life was when her diary was stolen while on tour. Perhaps it was the subject matter within the folds of the pages or the violation of her privacy (or both), but to this day, it’s still a sensitive topic. “I don’t want to talk about it, she says. “It was a very bad day,” she adds before moving on.

Much of her can-do attitude comes from her mother Joyce Jones, who she says is her “biggest cheerleader.” Mimicking Joyce’s soft squeaky voice, Burruss recites the expression her mother often told her as a child, “If you can conceive the thought, you can make it happen.” Adding, “I’ve always decided everything I ever wanted to do, I’m going to do my best to try to make it happen. Cause at the end of the day, if I don’t even attempt to try, then I defeated myself.” Touché.

The Chi actress is anything but shy. She admits she is the friend who always has a dirty joke in the back pocket of her protruding jeans. I’d expect nothing else from the sex-positive performer, who brought the “Welcome To The Dungeon” tour to 12 major cities including New York City, Philadelphia and Chicago. The woman whose unabashed sexual commentary fueled “Kandi Coated Nights” and, Mistress Angel, who blessed our TV screens (and Cynthia’s stimulating bachelorette party) with B.O.L.O.

Kandi had the foresight, long before Black women were able to be unapologetically sexy like Megan The Stallion or Cardi B, to lean into her authentic self and create brands around her personality rather than conform to the cookie-cutter standard of conservative media. “Even if you are the cleanest of the clean, and do everything by the book, a lot of times they still don’t choose you,” she says. Thus, Bedroom Kandi was born.

Burruss invited us into her bedroom and though it made some members of her team “cringe,” she made the stern decision to “focus on her own thing.” She embraced her sexual prowess and turned into a lucrative business.

“People respect who I am and realize that I don’t really give a damn what people say or care to change my brand at all for anybody. What I do actually works,” she says. “I represent most women. At the end of the day, as a lot of us are mothers, a lot of us are business women. A lot of us have sex. Like, why are we pretending that we’re not sexual beings because we’re a mom. Sex don’t stop just because you had a baby? Being sexy, shouldn’t stop just because you had a baby, like those things should still continue on.”

Kandi admits the rise of social media played a major role in the success of her sexy brand. “When I first came out with Xscape, there was no social media, that didn’t exist. So I thought I was sexy under my baggy clothes because I loved to show my abs back then. We were known as tomboys and some people used to make ‘ugly’ jokes about my group. And it used to bother me because, in my mind, I was like, hold on now, I’ve never been called ‘ugly.’

When we revisit the topic later in our conversation, Kandi reveals forgiveness isn’t her “strong point.”

“I’m not good at forgiving. That’s something I definitely need to work on. I mean, there’s no doubt. Like if I don’t mess with you, I don’t really mess with you. And it’s hard for me to come out of that.”

While many of us became familiar with Kandi through her music with Xscape and songwriting credits on colossal hits No Scrubs and Bills, Bills Bills, RHOA introduced the Georgia-native to a new audience.

“When I got on ‘Housewives,’ the people got a chance to see the side where I would say anything when it talks about sex or make jokes that may be inappropriate sometimes,” she explains. “People just got to see a different side of who I am personally. And I just feel like, over time, I’m not necessarily, you know, the one who’s gonna walk around in a throng every day, but if I want to, I will.”

That relatability made Kandi a fan favorite on the game-changing Real Housewives Of Atlanta — a life-changing venture she didn’t see coming. Reality TV was still in the nascent stage when Kandi’s longtime friend and popular ATL hairstylist Derek J passed along her contact information to execs over at Bravo, who were casting for the show that had only one season in the books. Despite “not seeing herself on it,” Derek J insisted she entertain the opportunity.

“‘I’m going to tell them to call you because they need somebody with they own money,’” he told the music industry veteran who was still apprehensive about it. “In my mind, I didn’t think it was gonna change my life.” Admitting she underestimated the power of reality TV, she admits, “I thought it was something I would probably do for fun for like a year. I’ve already been a public figure before – not knowing that this was going to be totally different. I never expected that. Walking into it. I just thought it was just something to do. And I definitely didn’t see myself being here all these years later doing it. But it’s become a major part of my life that I did not see coming at all.”

Another thing Burruss didn’t see coming is a relationship with Todd Tucker — a former line producer on RHOA and soulmate. Unlike other men in her past, Todd kept her attention through titillating conversations that never felt “boring.” Their chemistry was palpable.

“We clicked from the jump,” says the Grammy Award-winning entertainer. “The thing about Todd that was different than everybody else, I never got bored with him. I never got tired of talking to him. Communication never felt boring. It was just a natural flow. When I’m with him, I always have a good time. We always have fun together. That says a lot for me because I remember past relationships – after a while, I’ll be ready to move on. I had a really short attention span or either they would be messing up. We just connected and I never was bored.”

We watched Kandi and Todd’s relationship blossom on RHOA in spite of tension from her mother Mama Joyce, whose opinion often put strain on the creative lovers. But what is determined by God will not be obstructed by man or woman and the two eventually tied the knot in a luxurious wedding in 2014.

“I married the perfect husband for me. He pushes me and motivates me as well. I know sometimes people can be in relationships that don’t necessarily help them grow. But I feel like I definitely found the perfect mate that waters my flowers.”

“That’s what the kids are calling it,” I joke. She laughs before breaking down why he’s the perfect mate.

“He never tries to stop me from just being naturally who I am. For instance, ‘Kandi Coated Nights’ where I openly talk about sex online; or like you said, bedroom candy — when I will talk about my products and give people tips on what they can do. Doing the show that we used to do, we took on the road. we’d be walking around with thongs on, on stage. A lot of men would not be supportive of that. I can think of a couple of ex-boyfriends who probably were like, ‘Are you crazy? I’m thankful that I have a husband who is okay with me being me. The only time he seemed like he was like a little weird about it was when I was first joining The Chi and, I had to do a sex scene.” She explains, “He was supportive, but it was a little awkward for him. I’m not gonna lie about that, but he was still supportive. It wasn’t like, he was like, ‘No, you can’t do this show.’ He had to deal with it in his head.”

Kandi made her acting debut in season three of Lena Waithe’s The Chi, bringing to life Roselyn Perry — the estranged wife of Otis “Douda” Perry. She admits she was “nervous” about the sex scene and gig overall.

“This was my first major role on a TV show that’s scripted. I came into it knowing that this scene was going to happen. I was already trying to prepare my mind for it, but, it’s like, I have to go through the motions with somebody that was a complete stranger. It was just wrapping my brain around the idea and the simple fact that I wanted to do justice to Rosalyn. I wanted her to be dope. I wanted people to see me in this light of being an actress and really feeling like I have embodied the character. I’m not just a reality TV star who got a break. She adds, “I wanted people to know that this was something I was serious about and I really want it to be respected in the lane. It really wasn’t about the sex scene as much as it was just about, okay, you know, this is, you are Roslyn and you know, you just gotta make it real.”

With her first acting gig under her belt, Kandi set her sights on a different stage – Broadway. Kandi joined the production team on Keenan Scott II’s Thoughts of a Colored Man starring Pose‘s Dyllón Burnside.

I am excited about it,” she says. “Broadway has been known as ‘The Great White Way’ for a long time in past history. To have a show like this with all of us, you know, being a part of it, championing it. It has to be a success. It’ll be a win for not just us, but for the whole culture.”

Thoughts of a Colored Man begins preview performances at Broadway’s Golden Theatre on Friday, Oct. 1, with an official opening on Sunday, Oct. 31.