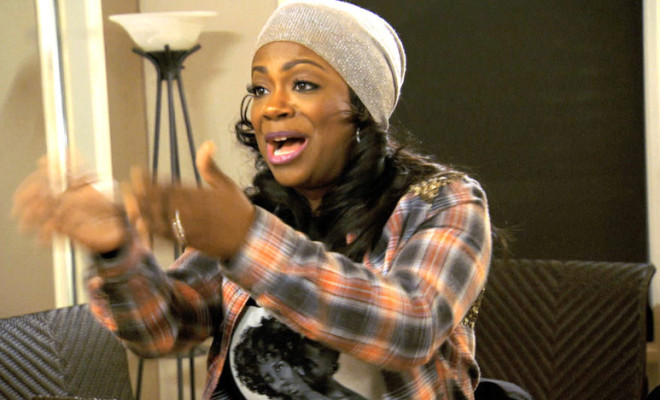 Kandi: Carmon Is Not the Best Assistant

Bravotv.com: What was going through your mind when Todd confronted your family?
Kandi Burruss: I just didn’t understand why he picked that moment to bring it up. We had just finished having fun as a family with the game. I felt like we should move forward to more positive topics. We don’t have to hash out everything.

Bravotv.com: Were you surprised Riley stuck up for Matthew?
KB: Riley was just over it. Carmon, Don, and Matthew had been going back and forth with side remarks the moment we landed in Steamboat Springs. I guess I was surprised that she liked Matthew enough to speak up and take his side. Riley doesn’t speak out a lot, so when she does, people pay attention.

Bravotv.com: Why did you finally blow up on Carmon?
KB: My intentions were not to blow up on her. I was just telling her the truth. They were coming at me saying that I should have explained to my family their job positions so they wouldn’t have to, but what I was saying is that neither of us should have to explain to my family about their jobs, because it’s not my family’s business. So why play into that? Then the conversation went a little further when I told Don that I tell people he’s great at his job and didn’t give Carmon the same compliment. I had to be honest. Carmon is not the best assistant. The fact that we are friends has given her job security. Now she has gotten better, but it took four years to get to this point. I was trying to be nice about it, but when I kept having to give examples of why I said she wasn’t the best at the job, I started to get frustrated. It’s not like I’ve never told her she needed to step her game up. I didn’t know why I had to break this down as if they didn’t know what I was talking about.