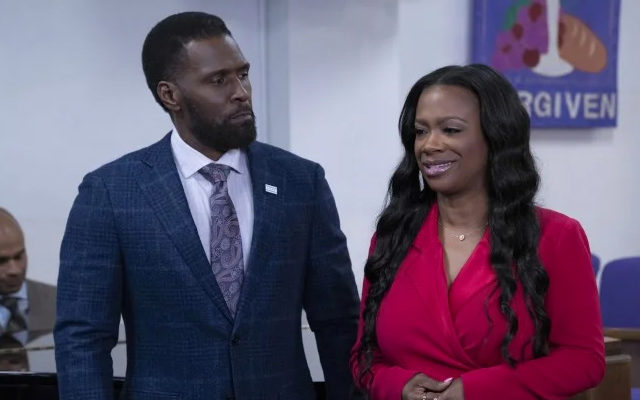 If there’s anyone who knows how to hold down multiple jobs while the world is locked down, it’s Kandi Burruss. The Real Housewives of Atlanta mainstay won The Masked Singer, dropped a hit song and debuted as a recurring player on Showtime’s The Chi, all while in quarantine. And now, she’s back to work on what will be the 13th season of RHOA — even with the coronavirus pandemic still happening.

“Let me say kudos to Bravo and kudos to Truly Original, who produces our show. They have been going above and beyond to make sure that everybody is safe,” Kandi shares with ET via video chat. “The cast and crew, we’re all being tested weekly, as well as they only allow very few people within [a] scene. If [any] one of us go out of town or do anything, then we’re quarantined.”

Kandi says all the precautions shouldn’t affect the content of the show too much, though. She says all cast members should still be able to film group events together, they’ll just be limited to strictly the cast and family members for now. She adds that they’re mostly filming at home these first few weeks, as the city of Atlanta is still largely shut down (the cast lives in the metro Atlanta area, in various surrounding cities).

“They are following the rules of not only our state, Georgia, but also what the mayor wants,” she says. “We follow all the rules of the city Atlanta, so it limits where you can go, it limits how many people I can have come through, because you know me, I’ll have an event and there’s tons of people there, but I can’t do that anymore. But as far as the ladies, our close family members, you know, they’re testing some of our family and significant others, so everybody there will feel safe and be safe.”

While Bravo has yet to confirm casting for season 13 — and doesn’t comment on speculation — Cynthia Bailey, Kenya Moore and Porsha Williams are all expected back for the new batch of episodes as peach holders alongside Kandi. Eva Marcille, who joined the show in season 10, announced earlier this year that she was handing in her peach for a life away from reality TV. Still, Kandi says Eva remains a part of this group, though it remains to be seen if that means appearances for her on the new season.

“I was talking to her about that yesterday,” Kandi reveals. “I was saying people still want her to be amongst the group, even if she’s decided not to be a regular part of the show. So, obviously, that’s always up to her. As of now, she’s like, ‘No.’ But I hope she changes her mind, because at the end of the day, we do have a genuine relationship; that wasn’t for camera or anything. She invited us over to her house because she cooked, and then she invited Kenya and Cynthia. And the cool thing is — what people are not going to get to see is — that her and Kenya are, like, really cool, super tight now.”

Kandi hopes Eva comes around at least a little bit to give some closure to season 12, which she notes ended with a lot of chapters unfinished. NeNe Leakes walked off the virtual reunion and it remains to be seen if she’ll be back for season 13. Earlier this week, gossip site Love B Scott reported that NeNe was out and that actress Drew Sidora and YouTuber LaToya Ali were joining the show.

“I don’t know what NeNe’s doing,” Kandi confesses, adding that she doesn’t know anything about any new cast members, either. NeNe has said fans will hear it from her first if she does wind up exiting the show.

“I just started taping, so I’m not sure who’s in and who’s out,” she shares. “They don’t let us know, normally. Typically the way it works is, in the beginning of taping we just see more [of] my own personal life and story and eventually you start trickling in scenes with other people.”

“Until we have something where everybody is supposed to be there, I’m not sure who everybody is,” she adds.

A lot has changed in the world since the RHOA ladies filmed their virtual reunion, most notably the reckoning with racism facing the nation. Porsha has put herself on the front lines for racial equality, recently getting arrested for protesting the murder of Breonna Taylor. Kandi says fans should expect to hear a lot about the Black Lives Matter movement on season 13.

“I love what Porsha is doing right now, I love the fact that she’s stepping up, especially in her grandfather’s footsteps,” Kandi says. Porsha’s grandfather was legendary civil rights leader Hosea Williams, who worked closely with Martin Luther King, Jr.

“It’s a wonderful thing to see her step up in the way that she’s been stepping up in, putting her own freedom on the line for what she believes in,” she continues. “Clearly in the past, yes, she was not necessarily the person that knew all the things about the history situation, but I mean … that leaves room for growth, and clearly she has grown a lot over the last few years.”

Porsha infamously confused the Underground Railroad for an actual train system during her early days on the show, which proved to be an educational moment for her. The Atlanta Housewives have never shied away from difficult conversations when it comes to being Black in America.

“It’s a reality show, which means you have to keep it real and we have to talk about what’s really happening around us right now,” Kandi notes. “Obviously the conversation of how we get [to equality] is definitely going to be a conversation that’s gonna be had. … I don’t know how it’s going to work — we’re just in the beginning — so we’ll see as it goes, but just like everything that’s happening in our lives we talk about, so it’s definitely gonna be discussed.”

Kandi says she and her husband, Todd Tucker, have spent the last weeks having discussions with their children about the movement. Their youngest, 8-month-old daughter Blaze, is obviously too little, but their 4-year-old son, Ace, has been asking a lot of questions and their eldest kids, Kandi’s daughter, Riley, 17, and Todd’s daughter, Kaela, 24, have turned out to be sounding boards for the couple.