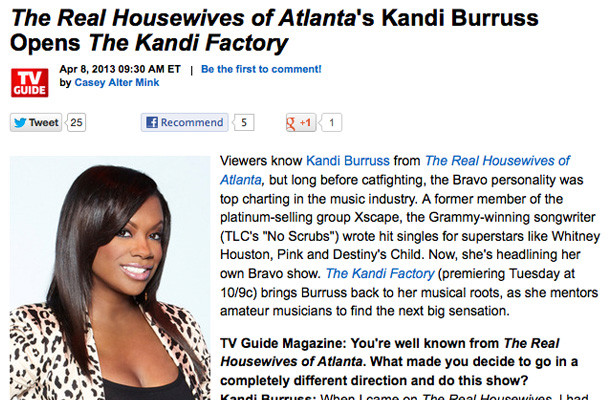 Viewers know Kandi Burruss from The Real Housewives of Atlanta, but long before catfighting, the Bravo personality was top charting in the music industry. A former member of the platinum-selling group Xscape, the Grammy-winning songwriter (TLC’s “No Scrubs”) wrote hit singles for superstars like Whitney Houston, Pink and Destiny’s Child. Now, she’s headlining her own Bravo show. The Kandi Factory (premiering Tuesday at 10/9c) brings Burruss back to her musical roots, as she mentors amateur musicians to find the next big sensation.

TV Guide Magazine: You’re well known from The Real Housewives of Atlanta. What made you decide to go in a completely different direction and do this show?
Kandi Burruss: When I came on The Real Housewives, I had so many people coming up to me every day saying, “If you can make Kim [Zolciak] sound like that, I know you can do it for me.” I pitched the idea to Bravo thinking it’d be cool if we did a show where we help people who need somebody to bring their vision to life and help them with their dream of being an artist.

TV Guide Magazine: Is working with amateur musicians what you expected?
Burruss: To be honest, it was easier working with contestants who had never been in the studio. Some of the people who were on the show that had been trying to get record deals for a long time didn’t take direction that easily because they think they already know how they’re supposed to do it.

TV Guide Magazine: With shows like American Idol and The Voice, you have a lot of music-centric competition. How will your show hold its own?
Burruss: We don’t do it like the other music shows where they take the same people all the way through. Our show features two new people every week. I write an original song for each contestant, they record it, we give them full choreography to that song, they get their image changed and then at the end of about five days, they have to perform and do everything that we taught them in front of a live audience. We’re showing what the artist development process is — it’s a team that is making it happen.

TV Guide Magazine: If you have two new contestants each week, does that mean there is a prize at the end of each episode?
Burruss: [The winner] will get their own music video and then they get their single released. It’s basically a jump-start for their career. It’s an initial boost of what you need to get out there and get a record deal.

TV Guide Magazine: With such high stakes, what kind of drama will we see unfolding?
Burruss: It is intense when you’re together every day so people on my team actually fight each other. We had a big blow out in the studio one day that was unexpected. One of the contestants and the choreographer almost went to blows with each other. [Some contestants] can’t take the pressure — we had some that got so afraid that they started going into panic attacks and had to be rushed to the hospital. It was crazy!

TV Guide Magazine: What is your approach to mentoring the contestants?
Burruss: I ask them about their personal lives and I try to write the song based off of their interview. When they come here, we let them listen to the song and then they practice it for about an hour, and then they have to do an impromptu performance. From there I say, “Okay they’ll be able to pull this off” or “No they wont”. We’re judges, but at the same time, we are in a competition.

TV Guide Magazine: Will the show delve into your personal life at all or are you leaving that for RHOA?
Burruss: It doesn’t really go into my personal life. We keep it in the studio and stage.

TV Guide Magazine: Are your Housewives jealous that you landed your own show?
Burruss: I’m not the only one! Some of the other girls have things on the table that they’re working on, as well. And Kim has a thing, [Don’t Be Tardy].

TV Guide Magazine: Speaking of Kim, the two of you have had your fair share of drama over the song you wrote for her. How are things between you now?
Burruss: We resolved our issues — in the courtroom. It’s a simple court issue. I’m just letting the attorneys handle it. No big deal.

TV Guide Magazine: Will we see any of the Atlanta housewives stop by The Kandi Factory?
Burruss: Cynthia [Bailey] came to one of the live performances. I’m not sure if you’ll see her because I haven’t seen the episode yet, but she came for support. Then on that episode where my team got in a fight, Phaedra [Parks] came to mediate and try to smooth things over.

TV Guide Magazine: Do any other celebrities make appearances on the show?
Burruss: Ruben Studdard stopped through to mentor one of the contestants because he’s been through the whole music competition thing [with American Idol]. I thought he was the perfect person to come and talk to them.

TV Guide Magazine: You have had a very successful career in the music industry and have worked with so many incredible musicians. Who have been some of your favorites?
Burruss: TLC, of course. I have a good relationship with them. I also had a lot of fun working with Alicia Keys, but I haven’t talked to her in a long time.

TV Guide Magazine: Well maybe we’ll see her in season two of The Kandi Factory?
Burruss: I wouldn’t be mad at that!