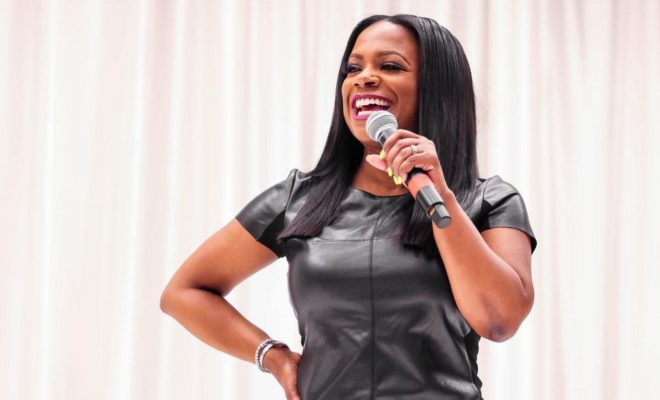 Kandi Burruss, Grammy-award winning singer and songwriter, T.V. personality and entrepreneur, has influenced people throughout multiple facets of life. Her tenacity, positive spirit and desire to succeed have made her a leading role model as a businesswoman.

With upwards of seven-plus ventures, Burruss understands what it means to embrace the pivot. From her days in the music industry to the Real Housewives of Atlanta to introducing her latest brand, Kandi Koated cosmetics, Burruss has learned how to capitalize on her brand’s influence. She also understands the importance of paying it forward. She has designed her one company, Bedroom Kandi, to offer individuals looking for consulting positions to join her team to sell the brand. Her company has 2,500 consultants across the country.

Burruss’ eclectic journey began at the age of 14 when she joined an R&B vocal quartet, Xscape, discovered by Jermaine Dupri. All three of their albums were certified platinum. “We started our group when I was in the ninth grade,” Burruss begins to share her story. “We got our record deal when I was in the 11th-grade. Our first single dropped the summer before my 12th-grade year and we immediately had a hit…One of the group members wanted to go solo. I felt like it was the end of the world…At that point, I had to figure out what I was going to do. I bought my first house at 19-years old. That’s when I found out that one of the group members was going to have a solo career. I had to figure out how I was going to continue to take care of myself because I didn’t have anybody who could afford my bills at that point.”

“I like to consider myself a problem solver,” she continues. “I don’t like to spend a lot of time talking about the problem, stressing out or being dramatic about it. I like to try and figure out how I can fix it.” When the group finally dissolved Burruss was contemplating whether or not she should go solo as well. Eventually, she and her one group member, Tameka “Tiny” Cottle, decided to start their own project: demo songs to record labels. Their first manager introduced them to Kevin “She’kspere” Briggs, a record producer. “He was the one that Tiny and I ended up doing No Scrubs with,” Burruss smiles. “When we met She’kspere he played us this track. We asked him if we could take the track and re-write the song for it. We recorded the song and someone played it for L.A. Reid. We were told that he wanted this song for TLC. I met him at a party and he told me that he was going to make this the biggest hit of my career. I took for granted what he was saying. He was right, though. It ended up being the biggest song of my career. It was a blessing. It just kind of fell into my lap.”

After experiencing major success in the music industry Burruss decided to transition over to the television side of the entertainment industry. Her exposure on the Real Housewives of Atlanta allowed her to capitalize on her stardom and start her first company. Once Bedroom Kandi became a success, she opened her second, third and fourth company. “Sometimes people start making a change with without making sure the first the first source of income sticks,” she states. “Before moving onto the next thing, make sure you continue to nurture the first thing. Get a good team around you because it’s difficult to do multiple things on your own.”

Through all of her transitions, Burruss relies on the following ideas to help make her pivots successful:

Everything is about quality. At the end of the day, you’re competing with people who have been doing this forever. You can’t slack off.

Make your brand desirable. Marketing is the main thing for every business. The only way people are going to know what you’re doing or what you’ve been up to is if you tell them.

Finish what you start. Be a person of your word. If you say you’re going to do something be consistent with it.
“Everything is a gamble,” Burruss shares. “Not everything can work out to the way you want it to. Sometimes you have to go back to the drawing board and figure out another way to make things work out. You learn from your mistakes and figure out how to fix what’s wrong. Sometimes people tell themselves they can’t do something before fully thinking their ideas through.”