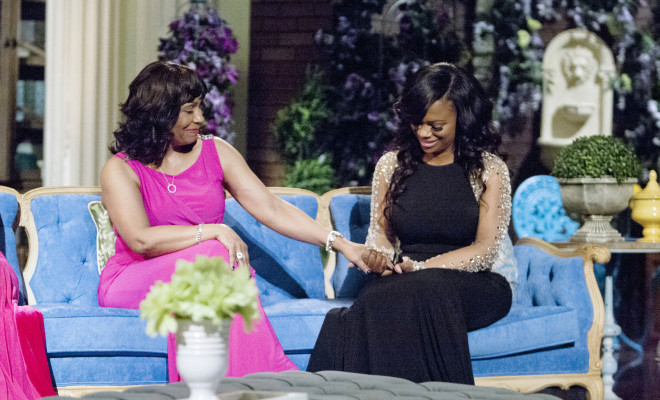 Kandi: “I Am In A Much Better Place!”

Hey everyone! I haven’t blogged in sooo long and I’m sorry. This season was extremely hard for me. I was having so much personal drama that sometimes I was just feeling overwhelmed, and I didn’t feel like talking about anything having to do with the show. My mom and I were going through a lot during taping, but when every episode aired, it felt like we went through it all over again. There were times where we weren’t speaking, and I was just stressed out about it. Between the drama with my mom and Carmon or my mom and Todd, things were just in a constant turmoil.

Whatever I’m dealing with personally I always use it creatively. That is how I express myself. That is how I deal and keep myself from going crazy. The musical obviously was inspired by what I was and am still dealing with to a certain extent with my mom. Some of the things that she has said I used for inspiration for the story and songs. For example whenever she brings back a rumor or something she has heard about Todd, she always says, “People in the streets say…”. I’m always like, who are these “people in the streets?!” Well, I wrote a song called “People in the Streets” for the mom character to sing.

Another example is my mom has accused Carmon and Todd of hooking up behind my back, so the mom in the musical does a similar thing to my character in the musical. Another example is my mom constantly talks about Todd not being a “provider,” so of course the mom does the same thing in the play. My mom always says, “I love you more than I love myself” whenever she talks about why she’s acting the way she acts, so I wrote a song called “A Mother’s Love” where the mom sings: “I love you more than I love myself. That’s what a mother’s love is.”

I can give you lots of examples of how my mother was my muse for this project. The only difference was I added a happy ending to the story where the mom and the boyfriend made peace at the end. Which makes me think about the conversation between my mom and Todd on the last episode when he told her that one day he hopes that she will love him too. Watching that made me teary eyed… I want so badly for that to happen. Hopefully in time it will. In real life, not just in the musical…

I am in a much better place! I’m sure you heard that last week Todd and I got married! You will get a chance to see the craziness I had to go through to make that happen later on Bravo so I won’t go into all of that, but things are better, just not where I want them to be between Todd and my mom. Keep us in your prayers!

Let me touch on the subject of Porsha and why I wanted to work with her before I end this. I’ve gotten a million tweets about it. First let me say I love to root for the underdog. Porsha has gone through a lot in the past year. I knew that she wanted to sing and act, so I wanted to give her the opportunity to show her talent. In my mind I felt like the musical would be something great for her to put her energy into and it would help her not to focus so much on the stress of her divorce. I’ve heard her sing, and I felt like I could write something that would complement her voice. I hadn’t seen her act, but she told me she could, and she did a pretty good job in her audition.

Don Juan was totally against Porsha, but I hired her anyway. For a second I felt like I may have made a mistake. The first issue was how much back and forth there was about the contract. I did learn from my last experience with Kim, so I wanted to make sure all of the terms were detailed on paper. The problem was that her attorney was asking for things that I felt only someone with a longer resume as an actress/singer could request. Porsha is just starting to build her resume and I wasn’t going to give her what I would give Eddie Levert or Shirley Murdock. It never became an argument between us, because when we talked she explained her attorney was just doing his job trying to get the best for his client, which is what he is supposed to do. So although it took longer than I would have liked, we worked everything out.

The second issue was scheduling. Time is money, and this time it was my money on the line… We had a tight budget. I spent hundreds of thousands to put this whole project together. Everything that we could tighten the budget on, we did. One of those things was rehearsal time. We only had a few weeks to learn script, songs, choreography, staging, etc. But Porsha came back with a list of a lot of dates she had to miss. That’s when I really started to panic and we hired an understudy for her. It wasn’t personal. It wasn’t that I didn’t believe in her, it’s just that I wasn’t sure with those limited amount of rehearsals that she would pull off everything I needed her to learn. After we had our talk she totally stepped things up, and I am so proud of how she performed! She’s a great comedic actress! At the end of the day Porsha and I are still cool, thank the Lord! We were able to do business and still continue to be friends.

If you would like to get a copy of the DVD to see how it all came together go to KandiOnline.com and order. You can also get the soundtrack of “A Mothers Love” on iTunes. It has the 19 songs that I wrote and they are performed by the whole cast! I am so proud of this musical. It means a lot to me, obviously because of what it’s about, but for me it represents so much more. It shows what Todd and I can do as a team. We put that musical together from beginning to end in three months. I mean writing script, writing all the songs, building sets, casting, hiring the crew, rehearsals, etc. Every time I mentioned what we were doing to people who act in or produce plays professionally, they would say that is unheard of, but TODD AND I DID IT! I feel kind of like the lyrics to that Ne-Yo song when he says, “I’m good all by myself, but I’m a force when we’re together.” I’ve always been confident in myself, but with my HUSBAND (I like saying that) by my side, I feel like I can do anything! Now if I can just get Momma Joyce on the same page, I’ll really be good! LOL!

Please check out my sites KandiOnline.com, BedroomKandi.com, and TagsAtl.com. And please get the soundtrack and DVD of “A Mother’s Love”! Thank you!!!