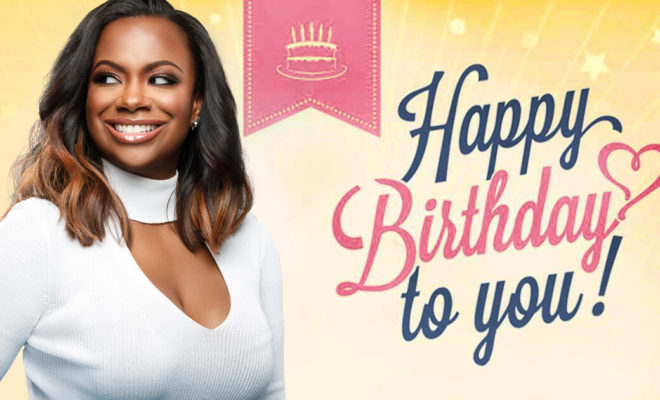 On this day, we would like to send a very Happy Birthday to the beautiful and talented Kandi Burruss!

As we all know, Kandi is much more than a reality star from #RHOA. She is a producer, a writer, and a business woman and devoted wife & mother. When Kandi sees an opportunity to continuously build her empire, she takes it.

To celebrate her birthday, we have compiled a list of songs that you may not have known Kandi Burruss wrote.

Kandi started out in the early 90’s with the Atlanta based group, Xscape. She was also the first African American woman to be named songwriter of the year by the prestigious American Society of Composers, Authors & Publishers (#ASCAP) in 2000.

Her accolades are numerous but we’re sure that you really don’t know ’bout Kandi like many of you should. So to keep you informed, check out our top 10 hits Kandi’s made over the years. We’re sure there will be some surprises.

10. TLC – No Scrubs is one of the most successful record co-written by Chilli, T-Boz, Debra Killings, Kandi Burruss and Tameka ‘Tiny’ Harris. The record was definitely a hot record and still receives a lot of airplay today.

9. DestinysChild – Bills, Bills, Bills was written and produced by the talented Kandi Burruss along with several other songs from The Writing On the Wall. The other songs include Hey Ladies, So Good, Bug-a-Boo, and She Can’t Love You. This album was definitely a hit!

8. Pink – There You Go was a major hit in the U.S. and overseas. The song was written by Kandi Burruss and Kevin “She’kspere” Briggs and Briggs to produce it. The song was number 2 on Billboard’s Pop charts.

7. N’Sync – It Makes Me Ill was was featured on N’Sync’s No Strings Attached Album. Kandi not only wrote the lyrics for this song along with long time partner Kevin “She’kspere” Briggs, she also served as a vocal arranger and producer for the song.

6. Alicia Keys – Jane Do was was featured on Alicia’s debut album Songs in a Minor. Kandi wrote the song with Keys and then sang background on the track.

5. Faith Evans – Best Man was featured on the The Best Man soundtrack.

4. Xscape – Feels So Good was the group’s first single off their second album, Off the Hook. The song was written by Kandi Burruss, Jermaine Dupri, and Lowe. One of my favorite albums.

3. Solé – 4,5,6 was not only written by Kandi but she also song the chorus and background vocals.

2. N’Toon – Ready was a young group based out of Atlanta. Growing up, I loved this group. If you ever wondered where Lloyd started, well here you have it. Check out the video and see who else you spot in the video. Oh, and of course the song was written by Kandi.

1. Usher – Pop ya Collar was featured on 8701, which was also written and produced by Kandi.

Be sure to show Kandi some Birthday love below in the comments!