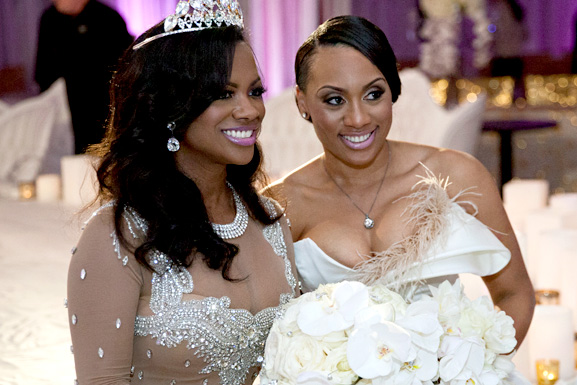 Carmon Cambrice was thrust into the drama between Kandi Burruss and her mother onReal Housewives of Atlanta, when Mama Joyce alleged that Kandi’s BFF was sneaking around with her husband-to-be Todd Tucker. Carmon will be back once again when Kandi’s Wedding Special premieres on Bravo this Sunday at 8p ET/PT. Here are four things you didn’t know about Kandi’s trusted confidante, assistant, and maid of honor.

She and Kandi go waaay back.
Like Kandi, Carmon was raised in Atlanta and the pair have been friends for 27 years. “We both grew up without our fathers in our lives and that was a common bond that fused our friendship,” Carmon tells The Dish. “We drive each other crazy sometimes but we can’t go a day without speaking to each other.”

She’s a loving mom.
Carmon has been a single mother to her 13-year-old son since her divorce three years ago. “Because of my father’s absence,” Carmon explained. “I was determined to have my child’s father in his life so at the age of 24 I married and after 10 years, I divorced.”

Being Kandi’s assistant is not her first career.
The licensed insurance agent ended up working for her friend after losing her job in 2013. Carmon says, “Kandi asked me to help her for a few weeks as she moved into her new home and renovated her office space. A ‘few weeks’ turned into a few months and now, two years later, I’m working as her assistant. I think it just works for us.”

She was once close to Mama Joyce.
“For 27 years she was like a mother to me,” says Carmon, “and I know that it really is hard for Kandi that we can’t be in the same room together.” Carmon adds that despite her attempt to reach out to her best friend’s mother, nothing has changed between the two. “I am not the type that normally forgives or says sorry especially when I feel I have been wronged,” she says. “But when it comes to someone you care about — I wanted to be open.” Now, she feels the ball is in Mama Joyce’s court. “At this point any hopes of reconciling our relationship is totally on Mama Joyce so when she decide she wants to talk I’m ready.”