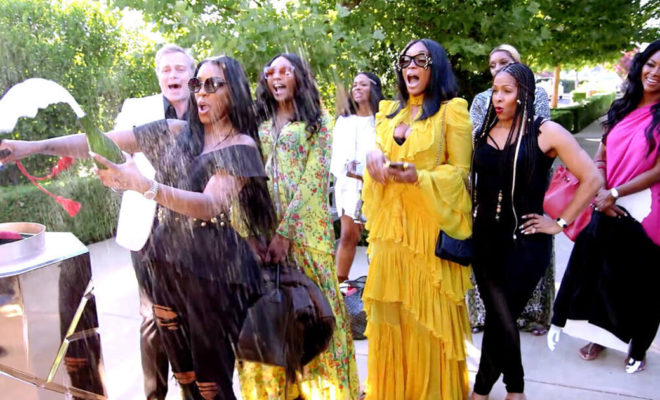 Your First Look At Season 10 Of #RHOA

Get ready to pop some bottles! The Real Housewives of Atlanta is returning for Season 10 on Sunday, November 5 at 8/7c. And this time around, it’s a whole new world for these Georgia Peaches.

Yes, Kenya Moore will be starting a new life as a newlywed after announcing her surprise engagement and marriage to Marc Daly. Cynthia Bailey and Shereé Whitfield also have new men in their lives. But prepare for all of these new relationships to inspire lots and lots of questions from the RHOA ladies. Plus, Porsha Williams’ new lifestyle as a “baby vegan” has some people scratching their heads. And Kandi Burruss will be hard at work getting her culinary empire off the ground with her Old Lady Gang Restaurant, as well as reuniting with her Xscape group members.

This season is bringing another major blast from the past as NeNe Leakes and Kim Zolciak-Biermann make their triumphant returns to RHOA, bringing their signature fierceness with them, naturally. However, Kim’s return brings up a lot of questions, such as, “Is Kim Porsha’s new ‘Frack’?” and, “Is Cynthia really best friends with Kenya?”

But of course, the RHOA crew will be bringing all the drama we’ve known and loved them for over the years. It’ll be round two for Kim and Kenya as they have another major blowup like the one they had at the Chateau Shereé housewarming party last season. And expect things to get super heated between NeNe and Porsha as they revisit last season’s drama with Kandi.

Shereé says it best — as she usually does — at the end of the above Season 10 supertease: “Oh my God! Oh, this is gettin’ juicy!”

Your jaws will be dropping when RHOA returns for Season 10 on Sunday, November 5 at 8/7c. Until then get more RHOA over at BravoTV.com.