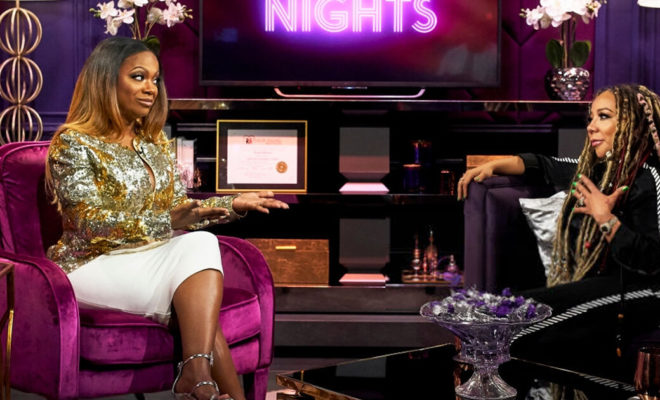 Did Tiny Harris Cheat On T.I. With Floyd Mayweather?

After a video recently surfaced of T.I. slapping the backside of another woman at his show, Tiny admits that she has gotten “attention” from her husband’s nemesis, boxer Floyd Mayweather, in a new episode of Kandi Koated Nights, a candid half-hour chat program with Real Housewives of Atlanta star Kandi Burruss.

“Everyone needs a little something, attention, especially when she ain’t getting it,” Tameka “Tiny” Cottle, 42, tells Burruss on the show. “If you ain’t giving it, she’s gonna go what, get it somewhere else.”

The Snapchat video igniting marital trouble, taken by a fan backstage, shows a man who appears to be T.I. slapping the butt of an unidentified woman, putting his arm around her and kissing her neck.

Tiny insists that her contact with Mayweather did not go as far as “cheating.”

“I didn’t really cheat,” she says to Burruss. “I didn’t have any sex.”

After rebounding from a near-divorce last year, Tiny and T.I. are back at war — and Instagram is the battleground.

The rapper, 37, posted a picture of a passage describing why men reportedly dislike marriage June 15. His caption included these words, “Note to women: Happiness needs no validation…. The Ego does. Most women out there nowadays just wanna be married to impress they friends, family (his side pieces) and fit into society’s standards. THAT’S NOT LOVE!!!”

Tiny later posted a video clip to her own account featuring rapper Snoop Dogg, who has been married for 20 years, discussing how strong women — his wife in particular — help him stay sane and successful. The reality TV star captured her video, “Crown the KING who knows that his QUEEN is the most important piece on the board.”

WATCH TINY ADDRESS THE RUMORS IN THIS EXCLUSIVE CLIP BELOW.

Whatever ends up happening with the stars of Tiny and T.I.: The Family Hustle, comedian Yamaneika Saunders reminds viewers on the show that Tiny is not to be taken for granted.

“Listen, she changed her eye color, she can damn sure change her man,” Sanders jokes on Kandi Koated Nights.